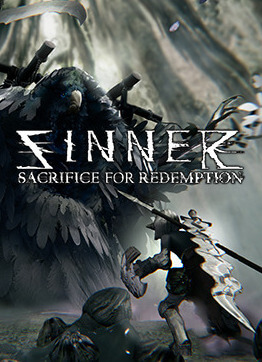 Sinner: Sacrifice for Redemption (stylized as SINNER: Sacrifice for Redemption) is a third-person action video game developed by the independent studio Dark Star and published by Another Indie. It was released on October 18, 2018 for Windows, PlayStation 4, Switch, and Xbox One. The game forces the player to fight bosses representing the Seven Deadly Sins one after another, while removing one of the player’s abilities for each fight. It received mixed reviews from critics, who cited its mechanics as a strong point, but criticized its settings, music, and story.

The main character of the game is a nameless wanderer who must fight against the avatars of the seven deadly sins, each representing something from his past.

The game has a boss attack format while it is based on the boss fights from the Souls series. The player receives melee and ranged weapons, as well as health potions, at the start of the game. All enemies have unique attack patterns. Once a boss is defeated, the player must sacrifice something, such as HP, weapon damage, or resources. The game has seven bosses in total, as well as an eighth final boss.

Sinner: Sacrifice for Redemption received a total score of 63/100 on Metacritic for its Windows version, and 57/100, 58/100, and 66/100 for the PlayStation 4, Switch, and Xbox One versions, respectively. IGN’s Mike Epstein rated the game 6.3 / 10, calling it a game that “moves the Soulslike genre forward in some interesting ways,” but saying that it “doesn’t feel like a complete package” and lacks “narrative.” and aesthetic detail. “GameSpot’s Ginny Woo rated the game 6/10 and said that while ambitious, its aesthetic was not as strong as its mechanics, and it lacked character motivations and had performance issues on Switch. Jordan Helm Hardcore Gamer’s rated the game 3/5 and stated that its main gameplay was “enjoyable and genuinely tense” but also that it “wavers because of … a lack of context and overall purpose”, saying it was based on “Tired templates and tropes.”